The all-new seventh generation Ford Mustang has been unveiled in the US this morning (evening their time) and Ford claimed to have redefined its classic machine nearly 60 years after its initial debut and confirmed Ford’s commitment to motorsport. FORDS NEW MUSTANG GT-3 RACECAR WILL COMPETE AROUND THE WORLD

The launch today will mean that official development of next year’s Gen3 Mustang Supercar will now change to the updated body styling for further testing.

What it means for Supercars Racing is yet to be confirmed, but the current appearance of the Gen3 Mustang test mule will be updated to the new body specification. What changes to the aero spec is to be determined which will require a new round of testing to confirm the parity with the Gen3 Chev Camaro. The seventh generation of the Mustang for the road has significant upgrades and confirms Fords commitment to the performance car market and includes a focus on track day performance.

And announced a brand-new track ready version of the Ford Mustang – The Dark Horse.

“With the introduction of the seventh-generation Mustang, Ford Australia will add an exciting new special edition nameplate to the Mustang stable, Dark Horse. Dark Horse is a street and track-capable performance Mustang with striking visual cues and all of the capability sports car lovers expect. With sinister looks and a specially modified 5.0-litre V8, Dark Horse will set a new benchmark for Australian street and track performance. Further specs and information will be released closer to local launch.” 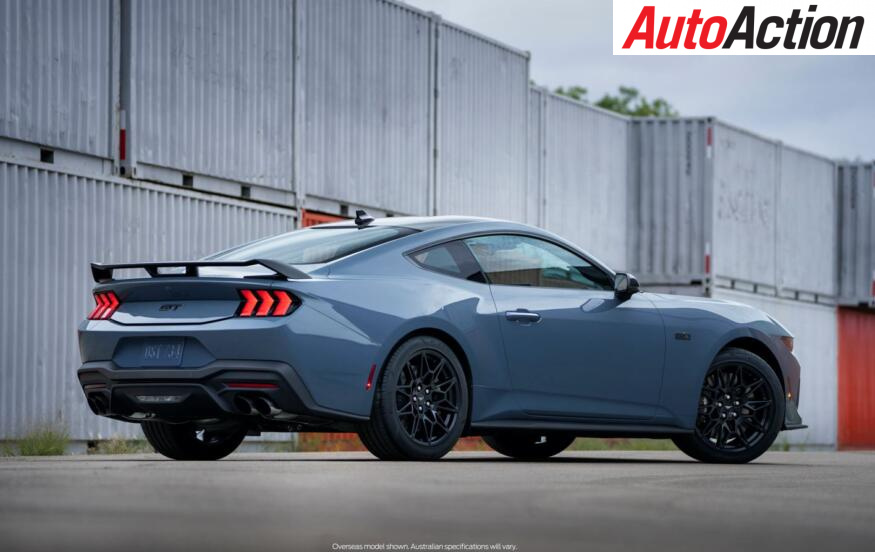 “Investing in another generation of Mustang is a big statement at a time when many of our competitors are exiting the business of internal combustion vehicles,” said Jim Farley, CEO of Ford Motor Company.

The new design includes new updated engines, with the Mustang GT’s most powerful 5.0 litre Coyote V8 ever created, as well as 2.3 litre EcoBoost engine for the EcoBoost model.

On a twisty back road or a weekend track day, the driver can quickly adjust steering effort, engine response, and transmission and electronic stability control settings through six available Selectable Drive Modes to create the perfect Mustang at any time. These are: Normal, Sport, Slippery, Drag, Track plus a customisable setting with up to six individual profiles, tailored to the driver’s view ahead of them. As each mode is selected, high-fidelity graphics in the digital instrument panel bring the mode to life like a videogame.

Changes to the interior of the new models include an immersive, fighter jet inspired, digital cockpit set-up, with two large customisable digital displays.

The all-new Mustang goes on sale in Australia in late 2023.

Ford once again sounds a wake-up call for sports car lovers around the world with the introduction of the all-new Ford Mustang.

The seventh generation is the most exhilarating and visceral yet, from its fighter jet-inspired digital cockpit to advanced turbocharged and naturally aspirated engines to its edgier yet still timeless exterior design.

“Ford, however, is turbocharging its ICE growth plan, adding connected technology, opinionated derivatives, and hybrid options to our most profitable and popular cars – all in the Ford Blue family – on top of investing $50 billion in electric vehicles through 2026.”

The new Mustang adds another chapter to an icon, delivering the looks, sound and appeal of the archetypal sports coupe. Whether convertible or coupe, V8 or turbocharged 4-cylinder, manual or automatic, Mustang has options for multiple prices and performance levels. Behind the chiseled exterior silhouette of the seventh-generation Mustang lies the most technologically advanced, driver-centric cockpit of any Mustang to date.

The fighter jet-inspired cockpit offers the driver two flowing and curved displays that can be quickly customised to show the information the driver wants or needs to see.

“We can be creative showing necessary driving information yet also give the driver control to decide how to display everything from selecting colors to classic Mustang gauges to simply creating a ‘calm’ screen where only minimal details are displayed.”

When choosing personalised drive mode settings, the car’s setup is displayed on the centre stack as real-time graphical renderings. Settings can be adjusted by simply swiping the graphic to rotate the car virtually in true gamification style.

This digital instrument cluster can be configured to flow seamlessly into a SYNC 4 centre stack behind a single piece of integrated glass that’s angled towards the driver.

“We knew what customers wanted – it was a case of designing the most digital Mustang ever while retaining the all-important driver-focused cockpit,” said Ricardo Garcia, Ford interior design manager.

Beyond the screen, an all-new race-inspired flat-bottomed steering wheel provides more space when getting seated inside and while performing a heel-toe downshift during spirited driving in manual Mustangs.

Outside the vehicle, animated welcome lighting greets drivers as they approach while Mustang’s splash screens come to life while entering the vehicle. The centre console can also incorporate a wireless mobile phone charging pad 2 while new overhead USB ports are installed above the cockpit, conveniently located for track camera and other devices, and helping prevent wires from draping across the cabin.

The available sound system is optimised for Mustang’s interior, contributing toward the visceral experience of Mustang ownership for sharing the ultimate driving playlist through Apple CarPlay

, both of which are fully compatible with Ford’s SYNC 4 1 system

The seventh generation adds modern chiseled looks to its heritage-inspired design, which sets out to appeal to the broadest Mustang customer mindset yet.

Its low, horizontal brow across the front of Mustang’s signature three-section hood aligns with LED headlamps to create an aggressive front end, influenced by the original 1960s design. Its sleek roofline, broad sprinting stance and shortened rear overhang are also true to the authentic proportions of the first generation, while the widened rear haunches point to the power over the wheels in true Mustang style.

The roofline is optimised for the driver’s entry to and exit from the vehicle without removing their helmet on the track, and an extended rear spoiler module houses new crisp signature tri-bar lighting and redesigned diffuser for improved aerodynamic balance in the rear.

Each model in the Mustang lineup carries its own unique front end. GT is differentiated from EcoBoost models by larger, more aggressive grill openings, engineered to allow increased airflow, reflecting the increase in power and performance. The car’s aerodynamics are optimised further with the addition of new hood vents and redesigned front splitter.

“Both the EcoBoost and GT Mustang have unique styling cues that deliver on their promise of Mustang Performance,” said Christopher Walter, design manager, Mustang.

“The new Mustang is more chiseled and edgier, leaning into Mustang’s classic brawniness and timelessness.”

The compact roof design and independent rear suspension also contribute toward generous luggage space that can accommodate up to two golf bags.

Mustang’s Most Advanced and Athletic Engines Ever

The way Mustang looks, drives and sounds is key to the experience that makes drivers want to get in the driver’s seat and hit the road. The all-new Mustang delivers an even more exciting drive experience with new and advanced engine technologies.

It starts with Mustang GT, powered by an advanced, 5.0-litre Coyote V8 engine. The fourth- generation 5.0-litre is set to deliver the most naturally aspirated horsepower of any Mustang GT.

“This is the most athletic and confidence-inspiring Mustang EcoBoost and GT to drive yet,” said Ed Krenz, Mustang chief engineer.

“Whether driving an automatic or manual transmission, thanks to drive modes combined with fine-tuned digital engine, suspension and steering controls, we’re now able to give drivers peak performance everywhere from their favorite roads to their local track.”

The feeling of freedom and confidence Mustang instills in its drivers is amplified when they take control of how the car behaves.

The all-new Mustang goes on sale in Australia in late 2023 and is assembled at Flat Rock Assembly Plant in Flat Rock, Michigan in the United States.