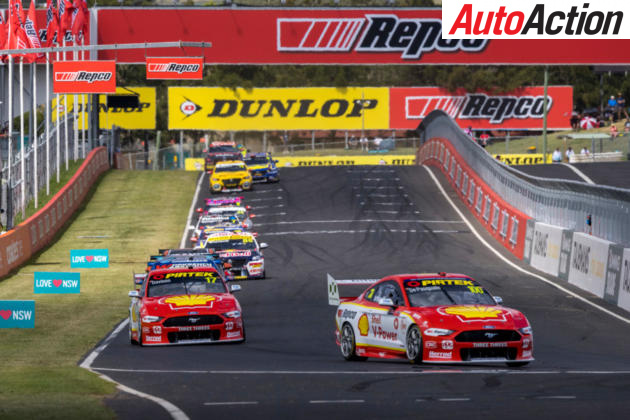 The winner of this year’s Australian Formula Ford Championship will receive a test drive with title winning Supercars team Dick Johnson Racing in 2022. It follows a Formula Ford workshop conducted last week to discuss the future of the long-running, developmental category in Australia. Planned for early 2022, the test will take place at Queensland […] GARDNER ON PODIUM IN FRANCE

Aussie Remy Gardner recovered strongly after being nearly knocked off his bike on the opening lap to finish in second in the Moto2 race at Le Mans. His KTM Ajo teammate Raul Fernandez took the race victory and closed to within one point of Gardner at the head of the championship. Starting from seventh Gardner […] Australian Indy Lights contender Alex Peroni broke through for his first major results in the US by placing third in the second race of IndyCar’s second-tier on the Indianapolis Motor Speedway’s road course. Swede Linus Lundqvist dominated proceedings in qualifying, which translated into the opening race as he took the lead in the title ahead […] On the final day of mid-season testing in the FIA Formula 3 Championship test at Jerez, both Australian drivers ended up within the top 10. After topping both the morning and afternoon sessions on Day 1, Queenslander Jack Doohan again found himself up the pointy end of the timesheets. The morning conditions were perfect for […] After finishing second in the FIA Formula 3 Championship Feature Race, Australian Jack Doohan has continued that momentum by topping both test sessions at Jerez. Less than a week after a strong season-opening round at the Circuit de Barcelona-Catalunya, Doohan was fastest on the opening day of the mid-season test. The Queenslander showed pace throughout […] TCR Australia rookie Luke King will complete pre-event preparation ahead of the fifth round at Morgan Park. Currently placed second in points to teammate Chaz Mostert, King has never raced at Morgan Park, situated in rural Queensland and is aiming to complete laps at the venue, but is in search of a car to do […] TCR Australia driver John Martin is eager to make a return to the S5000 field after being part of the inaugural grid at Sandown in 2019. Currently racing a Wall Racing Honda Civic Type R, Martin completed double duty at both Sandown and The Bend Motorsport Park where he raced an AGI Sport-entered S5000 in […] After a tough couple of rounds Walkinshaw Andretti United driver Bryce Fullwood was pleased with the speed and confidence he felt within the car on Sunday. It has been a difficult period for the Northern Territorian, but at The Bend Motorsport Park Fullwood scored his first top 10 result since the season-opening race at Bathurst. […] The future of Formula Ford is set to be discussed in a meeting today. In attendance will be the Formula Ford Association administrator, Motorsport Australia officials, Supercars team principals Roland Dane and Ryan Story, Andrew Jones and long-time category entrant Michael Ritter. After Dane’s plans to develop and build locally developed open-wheelers as a replacement […] Tickford Racing’s Cameron Waters has heaped praise on his crew for turning around his damaged Ford Mustang from Race 10, to the winning machine in the finale at The Bend Motorsport Park. A major effort was involved in replacing the Mustang’s right-rear corner after Waters was hit by sparring partner Chaz Mostert in his avoidance […] A 5s penalty failed to hamper Andre Heimgartner as he took his maiden victory in Supercars and marked a number of firsts as it broke the Ford Mustang’s duck for the season. Contact in pit lane resulted in a 5s penalty being placed on the Kiwi, but he managed to comfortably hold a 9s margin […] Following on from its launch late last year, the first of Porsche’s new 992 GT3 Cup Car has arrived in Australia where it will be displayed at this weekend’s Supercars round at The Bend. Arriving directly from Porsche Motorsport’s Weissach headquarters in Germany, the new model provides a preview of what to expect when Porsche […] Just as Supercars is ramping up its Gen3 developments, NASCAR’s three manufacturers have revealed the Next Gen models each will field next year. Originally codenamed Gen-7, the concept began development at the NASCAR research and Development Centre in 2018 were revealed at the Park Expo in Charlotte, North Carolina bringing in a new era termed […] MEN BEHIND THE SCENES REWARDED

The unsung patrons of the S5000 Australian Drivers’ Championship were also congratulated at last weekend’s final round at Sydney Motorsport Park. Joey Mawson’s Gold Star success came despite being a late addition to the series, but this was thanks to former Formula Holden competitor and managing director of horse-breeding giant ALABAR Allen Galloway alongside Melbourne […] More than a decade after ending its prototype collaboration in the American Le Mans Series, Team Penske and Porsche will renew this relationship to contest the FIA World Endurance Championship and IMSA Weathertech SportsCar Championship. The partnership resumes as Porsche Penske Motorsport where two LMDh prototypes will contest the top class of each series with […] Brad Jones Racing has announced TRG Transport Solutions as the sponsor that will align Todd Hazelwood’s #14 BJR ZB Holden Commodore this weekend at The Bend Motorsport Park Hazelwood is a proud South Aussie and is pleased to be back by an SA company at his local racetrack. Round 4 of the Supercars Championship, the […] Both the weekend race format and the entry lists have been announced for the first round of the revised V8 powered Superute Series set to kick off at The Bend Motorsport Park this weekend. In total 13 of the new V8 engined Superutes will race at the fast and flowing South Australian venue. The field […] Max Vidau will return to Porsche Paynter Dixon Carrera Cup Australia for Round 2 at The Bend Motorsport Park in South Australia this weekend. The 2017 Australian Formula Ford Champion, was a race winner in the 2019 Porsche Michelin Sprint Challenge series with the Sonic Motor Racing squad before making the step up to the […] Jack Miller has earned his first MotoGP victory as a factory Ducati rider taking out the Spanish MotoGP at Jerez. The Australian, whose only previous premier class win came during a rain-interrupted race at Assen back in 2016, launched into the lead of the race with a blistering start from the front row of the […] BUCHAN: WE KNEW WE WOULD BE FAST AT THIS CIRCUIT

HMO Customer Racing driver Josh Buchan claimed his maiden TCR Australia victory yesterday and explained that he felt the win was coming. Stepping into the #30 Hyundai in which Will Brown drove to the inaugural TCR Australia Series title in 2019 was going to be no easy feat. However, in his maiden TCR race at […]